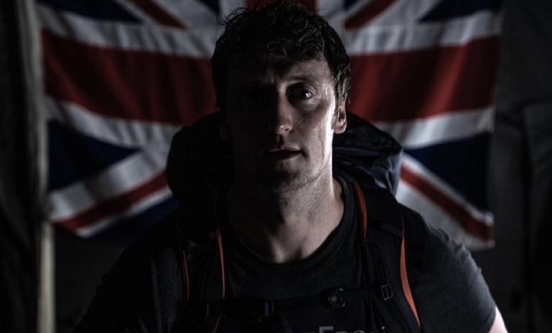 As we prepare to launch Naturally Talented Me this Friday 22 May on Zoom at 4pm (join us if you can by hitting the link at the bottom), I’d like to share with you an interview I had recently with extreme adventurer and ex-forces inspiration Darren Hardy. It gives a compelling illustration of the power of natural talents and their importance in showing a person’s complete potential.

Darren has given more than most. Much more in fact.

He has served his country as a combat soldier in some of the most godforsaken places on earth and been rewarded with a lifetime of hellish memories and a hefty dose of PTSD as an added bonus.

He has been forced into a life of ‘early retirement’ from the career he adored and now faces the daunting task of reinventing himself in a world that often views the ex-military with a degree of trepidation and lack of understanding. Some might call it ignorance.

I wanted to right some of the misperceptions and arranged to ‘interview’ Darren just after he had completed yet another physical and mental challenge to raise money for Great Ormond Street Hospital – as a father of two daughters, this is a cause close to his heart. I wanted to probe underneath the camo-exterior and get to the heart of what makes such a person tick and how he is handling the transition to Civvy Street from a world that was so far from my own cosseted existence.

The day before our ‘fireside chat’ (Zoom call), Darren had TABBED (Tactical Advance To Battle) 75 miles. Impressive. And he’d done it on a treadmill. In a 12x12ft military tent. In the dark. On his own. Definitely impressive.

So question one wrote itself:

The seemingly flippant response “Why not?” belied the impetus behind many of Darren’s actions and aspirations. He thrives in situations where there is risk and the real prospect of failure, seeing them as opportunities to improve and progress both physically and mentally; real tests of his mind-set and his ability to perform way beyond the expectations and (apparent) limits of normal earthlings.

Darren has, by his own admission, come face to face with, visited and dwelled overly long in, some very dark places and experienced even darker thoughts. Fortunately he foresaw the outcome before it was too late and turned despondency into drive and ambition. And now there is no stopping him.

Partway through writing his autobiography, and with a myriad of ideas for inspiring and motivating others to perform beyond their perceived potential, Darren has a clear vision of where he wants to be and what he wants to become. He is, step by step, creating a legacy.

Darren responded to my request to trial the Naturally Talented Me platform with enthusiasm and curiosity (a trait that was soon to reveal itself) and quickly completed his own profile. Many of his talents are visible and on show when you meet him, and obvious to even the least discerning, but even he was surprised at the full reveal.

The expected list included Independent, Determined, Adventurous, Team Player, Energetic – all predictable traits of a hardened military man and all explainable with examples of when they are harnessed and brought to bear. The less expected talents of Free Thinking and Curious bore further discussion and a request to link them to the task he had just undertaken. Could he identify how these newly revealed talents helped him achieve the formidable challenge?

Free Thinking: 51 miles in at 3am in a pitch black tent (other than a dull glow from his head torch), Darren reached his darkest moments and was closest to giving up. To be fair, that was NEVER going to happen, but the dark demons of doubt started playing with him and he found himself needing to “think differently”. He took himself back to his army training and the mantra “no plan survives contact”, which basically means, sometimes you have to think on your feet and react to the situation you are faced with. It requires mental agility and the ability to create images and scenarios that result in a positive outcome.

Darren went back to his training around the track and the knowledge that he KNEW he was capable of completing the miles. After all, he’d done it before. He pictured success and the comfort of familiar settings and transported his mind to that place – ignoring the dark, uncompromising surroundings that conspired to defeat him. They didn’t. He wouldn’t let them.

Curious: This was all about what the body and the mind could withstand – isolation. Extreme discomfort, negative thoughts and disruptive demons. Darren finds his motivation in unusual places – one being the curiosity to see how far he can challenge himself and the fortitude to recognise how he reacts physically and mentally and how to deal with the impacts. He is acutely aware of his shortcomings and his strengths and draws on these in equal measure to succeed.

So whilst Darren’s Natural Talents vary widely, the combination melds together to create an individual who can withstand significant extremes. His awareness of what he is made of helps him to harness those attributes and draw on them when the time comes and the situation demands.

I asked Darren what he had learned about himself as a result of this challenge.

“There is always something in the tank. Something to draw upon to get you the next step forward. I know this because whenever I have reached the end I have been able to squeeze out one more effort to go one more step, and eventually I get there.

“When my body was shutting down and I was close to crumpling, I thought back to previous situations and how I felt. I dug deep, remembered why I was doing it (for the kids at GOSH) and took it one (painful) step at a time. And I knew I would get there – because I had to and because I needed to.”

Finally I asked Darren how his experiences could be translated to help people operating, and perhaps struggling, in and with day-to-day life.

Whilst his experiences and efforts are extreme, the message was clear. We all have hidden in us the fight or flight mechanism, but in today’s comfortable lifestyle of instant gratification and relative comfort (compared to early man), the trigger is hidden deep inside the brain. The trick is to find it and apply it. To believe in our ability to go further, push harder and withstand what may appear to be impossible levels of challenge.

Be prepared to push beyond your normal effort and you WILL be surprised at what you can achieve – one step at a time. Slow but sure.

To start on this journey personally, you could start by completing your free profile at www.naturallytalentedme.com – a better awareness of what makes you unique gives you the tools to unlock your own potential. Believe you can be better.

Let’s get straight to heart of the matter Why so glum, it’s all on a platter What’s...

Before I get shot down in flames, let me explain. It’s all about diversity and the...

The impacts of COVID-19 are, and will continue to be, far reaching. We know that....

“The global CEO community need to revolutionise disability inclusion through leading by...

A big thank you to everyone who attended our pioneering launch event on Zoom today and...

This Friday (22 May) at 4pm we’re officially launching Naturally Talented Me (NTM) and...

00
We use cookies to ensure that we give you the best experience on our website. If you continue to use this site we will assume that you are happy with it.Ok